Muslim immigrants concentrate most of the hatred on social media

El 34.3% of the offenses published on social networks are focused on immigrants, specifically Muslims (with 12.3% of the messages analyzed). These are the data collected in the Bulletin for the Monitoring of hate speech in social networks carried out by the Spanish Observatory of Racism and Xenophobia (OBERAXE). Since May 2020, OBERAXE carries out daily monitoring of hate speech on Facebook, Twitter, YouTube, Instagram and TikTok, notifying the platforms of content considered “hateful”. Participate in the monitoring exercises of the “Code of conduct to combat hate speech on the Internet” signed by the European Commission and the main data hosting service companies (YouTube, Microsoft, Facebook and Twitter).

In the first two months of this year, 399 hate speech posts have been collected, of which 159 have been withdrawn. Facebook and Twitter are the channels where hate spreads the most, with 36.1% and 25.3% of the messages reported. Likewise, if the number of content removed over the total of those notified is considered, Facebook stands out considerably with 82% of the total (118 messages removed compared to the 144 messages notified).

Considering the hate speech content reported according to the reason for discrimination, OBERAXE presents the following graph: 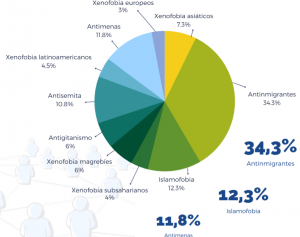 ASimilarly, the bulletin highlights the increase in discriminatory antisemitic content during the months of January and February; registering on Facebook an increase of almost six points more than in the previous period.

All these data show the need to continue working to raise awareness about hate crimes caused by racism and xenophobia. At Fundación Senara we carry out the project ‘ Together we are more ’ through which we intend to promote an inclusive speech free of hate originated by racist and xenophobic issues from childhood. This program is implemented thanks to funding from the Ministry of Inclusion, Social Security and Migration and the Asylum, Migration and Integration Funds.

With your contribution you support our work and projects to help others.

Collaborate as a volunteer in care areas for children and women.

You can find out more about which cookies we are using or switch them off in settings.

This website uses cookies so that we can provide you with the best user experience possible. Cookie information is stored in your browser and performs functions such as recognising you when you return to our website and helping our team to understand which sections of the website you find most interesting and useful.

Strictly Necessary Cookie should be enabled at all times so that we can save your preferences for cookie settings.

If you disable this cookie, we will not be able to save your preferences. This means that every time you visit this website you will need to enable or disable cookies again.